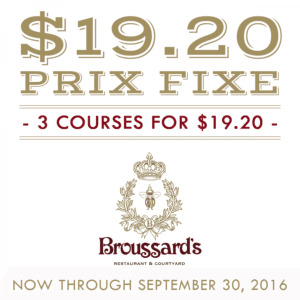 Article by: Ann Maloney, NOLA.com | The Times-Picayune Original article and source: NOLA.COM The summer dining deals in New Orleans just keep coming. This week, we added four more new deals to our growing list. We started with just 15 summer dining deals in New Orleans, and now we’re at more than 20. We’ve deleted one that ended and added these: There is an appetizer, dessert and wine special at Rue 127, a lunch special at Kingfish, a dinner special at Broussards and “wing fest” at Barcadia. Most last through August, but call the restaurants to be sure the deal still is on. Broussard’s, 819 Conti St., 504.581.3866 When: Dinner, daily, through September. What: The restaurant […]